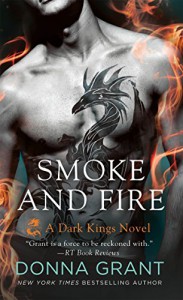 Ryder, the tech guru among the Dragon Kings, and he has kept a secret for three years--he found and left the woman he loves and who is his mate. He has not told anyone this and no one has suspected it.

Kinsey is also a techie with a tech firm and she had her heart broken three years ago when Ryder left without a word to her-just a note. She has put the pieces back together and is on her way to Dreagan to complete a work order for her company, unbeknownst to her is that Ryder is there.

When she walks into his domain she is both shocked and afraid, for she knows what he is and he knows that she knows. Ryder must find out why she is at Dreagan for it is very suspicious. They never called in a work order. Along the way things are rekindled and Kinsey tries desperately to protect her fragile heart. She is suspected of spying and evidence comes to light that makes it appear that she is there to spy and has betrayed Ryder. Ryder wanted to win her trust and love back, but now he is the one confused and heartbroken. Things unravel and plots are discovered. New allies join the group and Rhi is still on the hunt for any information on the Reapers (much to the chagrin of her watcher). Things are coming to a head in the series, sub plots are merging, once known villains are starting to look like possible Byronic heroes, and Con's secret lover is close to being revealed to all.

I look forward to the next one. Though I hate this isn't until 2017.