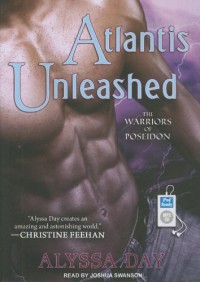 This is the second time reading this one and I think that might have influenced my very slow read of it.  Some parts were too slow and the duality of Justice was a bit weird.  I love the series, but I think this is my least favorite in the series.  He sacrificed himself to protect his brother Ven and Ven’s mate, in Atlantis Awakening and was Anubisa’s prisoner for months.  When he finally gets free, he isn’t the same, his Neried half has come forth and now he has two voices in his head, his and the Neried's.  Both Justice and Keely have had visions of each other, so when they set eyes on each other for the first time, Justice claims her immediately and she thinks he is crazy.  There were no surprises and I guess that is what kept me putting it down instead of continuing to read it. It is also the end of the school year, so things are crazy. I love the series and I am enjoying re-reading them, but this one was a bit hard to keep up with. I do look forward to reading more and if you haven't read the series at all, please do so.  It has stuck with me since I read it the first time and is one of my all time favorite series, which is why I am reading the whole series again. :-)