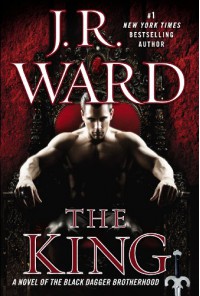 I have fallen way behind in the BDB series and so I decided that this summer I was going to get caught up. The King was an exhausting read; there were so many plot lines and it consistently changed between them all. A lot was going on. It was good just exhausting. I liked Assail and Sola's plot line, Trez and Selena's plot line, and of course Beth and Wrath's journey to parenthood. There were no "bad guys", the Lessening Society did not make much of an appearance in this installment and the conflicts pretty much revolved around relationship struggles and the attempt to overthrow the King. This wasn't my favorite in the series and I kind of wish Ward would have focused more on Beth and Wrath and left the other side plots to their own books or novellas. It was good, don't get me wrong, just so much going on and not all of it connected to what was going on with Beth and Wrath or their war with the Lessoning Society.